A few weeks ago I slightly threw my metaphorical toys out of the pram with Mr.HDD and ‘suggested’ he find some time in his busy schedule to spend with me. Shortly after this conversation I remembered there was more than one way to skin a cat and so as a birthday present to him I booked us a night away at Charlton House Hotel, a spa retreat in Shepton Mallet, Somerset.

We didn’t make it until after 5pm on the evening of our stay, largely due to a face-off between myself and a chicken. I lost the battle: all four chickens had no intention of being shut into their eglu before the sun had gone down and so Stepson #1 was ‘persuaded’ to call in on his way home from a shift at our local pub to lock the chicken house door, staving off any sly foxes! Once we arrived I felt immediately calmed and content, I LOVE spending time one-on-one with Mr HDD, (four children does on occasion warrant a ‘what about me?!’ moment), and the setting was perfect: Charlton House is a 17th Century Manor House. Our bedroom was called ‘Narnia’, the hotel receptionist suggested we be ‘careful with the wardrobe’, a literary reference completely lost on Mr HDD! 🙂 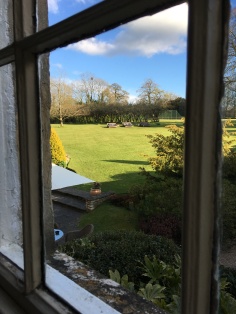 We immediately trotted down to the Spa with our robes and slippers in arms, only to be sent back to our room to change there, cossies on and robes wrapped tight we headed back down to the Spa and spent several hours relaxing in the Moroccan themed surroundings, including a hydrotherapy pool, laconium, steam room and sauna. Ok, let me be honest with you… we tried all of those things briefly, be rude not to, and then we headed outside wine and cider in hand and whiled away our time in the glorious hot tub under the setting sun. Admittedly it was a tad chilly when we climbed out, we had been torn between leaving our towels inside and making that shivery walk of shame towards our modesty or leaving our towels outside next to the hot tub and risking a glaze of chilly dew descend upon the towelling material. We went for the latter… but given a few more weeks towards the Summer months and I’m sure we would have danced half naked in the balmy evening air back in doors sans towels…. Or perhaps not, we are still in Shepton Mallet, let’s not forget!

We made it back to our room just in time to place a room service order. There wasn’t a huge amount of choice on the room service menu but all that was really needed was a few classics and once my spa robe was back in its rightful resting place around my chilled out body, there was no way I would be de-robing again and dressing for the restaurant for food! I wanted, robes, food, bed, telly and just the two of us. We ordered a couple of burgers and chips and then, eyes bigger than belly as is often the case, profiteroles AND a cheese board. The food hit the spot, we found a very old-school Harrison Ford movie to watch and settled back for a snuggle and another glass of wine… At least that was the intention, I think I actually fell asleep within three slurps and before Harrison had time to do much saving of anyone!

The icing on the cake for me with most hotel stays, and the thing I always look forward to the most is the breakfast the following morning and the Charlton House breakfast did not disappoint. Mr HDD stays away a lot in various hotels, in various locations, to varying degrees of comfort but no matter where he is he will always have just a bowl of cereal and maybe a yoghurt for his breakfast. I get the logic, he is wined and dined quite a bit so the breakfast would just add yet more calories, but come on… It’s included in the price! 🙂

I went for blueberry pancakes with maple syrup on this occasion and I coerced Mr HDD into having eggs benedict, he even added a sausage in for good measure. But before the breakfast arrived I found and tucked into this little beauty on the buffet table:

It was a Kilner jar of breakfasty loveliness: strawberries layered with yoghurt, topped with toasted oats and maple syrup . The oaty topping had crisp layer of sugar which cracked when I dug my spoon into it. So simple and soooooo delicious! I could have eaten several… I didn’t, I had to save room for the main event. I absolutely LOVE anything Kilner jar-related and often make thank you presents for people presented in said jars but I had never thought of this before. Breakfast in our house, as with many many others I am sure, is a hectic melee of grab and go style eating, in fact Son #1 comes to work with me three times a week, (teacher; son at my school; never taught my own children; couldn’t think of anything worse for them or me; breakfast in classroom whilst helping me set up), and this is such a handy way to grab a breakfast and go. Also perfect for the Pesky-tarian who spends WAY too much time applying mascara to prepare anything beyond undoing the plastic wrapping of a chocolate brioche. Breakfast has been on my list of ‘to-do’s for a while now. So when we returned home, I had a little deconstruction party and have created my own version of the Breakfast Pot. Please be aware I am not claiming any form of cooking/baking prowess for this particular recipe. This is just an anything goes jar of easy-going yumminess!

For the Breakfast Pots:

For these Breakfast Jars I used 125ml Kilner jars but it could in fact be any old jam jar you have knocking about and failing that… a mug!

I have become slightly addicted to these over the past couple of days and have in fact just made a fresh batch for breakfasts this week, just don’t forget to re-use your jar! I gave a couple to the Pesky-tarian and her friend for breakfast after a sleepover this weekend and they thought they were’so cute’ or words to that effect, they even took pics and uploaded to them SnapChat or Instagram or Musical.ly or some other social media front line that I’m too old and too tired to understand! But she is her mother’s daughter none the less!

As for the purpose of the weekend: to have some quality one-on-one time with Mr HDD? Speaking for myself, I had a lovely time. For those who know the area, no trip to Charlton House in Shepton Mallet would be complete without a cheeky pit stop at the Mulberry Factory store  admittedly Mr HDD was not so overcome with love and affection for me that he rewarded my weekend treat with the Anthony in Oak Natural Leather. I have’t quite been forgiven for accidentally igniting the last one (umm… turned on the wrong hob ring, beautiful soft leather strap in all its Mulberry glory was spread-eagled across said ring, damn you ceramic hob!), but we did also make a detour to Kilver Court next door and he did buy me an exceptionally soft and comfortable pair of Jack Wills skinny sweatpants which I have been hankering after, so I must have got something right!

I hope someone somewhere spoils you very soon… and if not? Spoil yourself!