Mr HDD and I took advantage of a child-free Friday night and celebrated Valentine’s Day by dining in. I wanted to prep something that looked impressive, as if I had spent hours slaving over a labour of love, when in reality I had managed to throw it all together in between a mountain of ironing and a pile of paperwork. Mr HDD will eat pretty much anything placed in front of him, albeit with varying degrees of pleasure, but his two favourite dishes are Thai Green Curry and Seafood Paella, so I opted for the latter.

The great thing about a Paella is that following a very basic formula you pretty much add whatever you have lying about in the fridge and it can be made with an added spicy kick if you choose which Mr HDD most definitely does!

The paella went down very well and although we had seconds, and in some cases thirds, there was still enough left over to feed the children the next day. (This recipe serves at least 6 people). The paella could have been de-constructed and the meat/seafood can be cooked separately, re-assembly can then happen at the table, ensuring all fussy/non-meat/non-fish eating characters are catered for!

Pud was a new recipe so no tweaking as yet, but a scrumptious success: Cookie Dough Pots, found on the fabulous Nigella website. 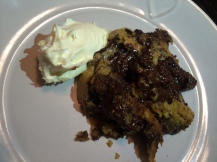 Here’s the link for this recipe:

A few days later, a quick ping in the microwave for a minute and the now hardened cookie pot softens and is just as moreish, especially with the ever important dollop of clotted cream.

We had a lovely evening together. Love second time around is a minefield, you are gifted or perhaps saddled with the awareness of what went wrong previously and it can be hard not to allow that to define your future relationships. We have managed so far to weather a few storms and surmount a few obstacles and ultimately there is no one I would choose to spend a quiet night in with more… well, apart from the Veggie, the Gourmand, the Fusspot and the Carnivore of course! 🙂